Earlier this month I attended the SBL Pacific Coast Region conference at Azusa Pacific University. For those who have been following the Bible blog sphere, this conference was particularly prominent, since Richard Carrier defended his new book On the Historicity of Jesus Christ during the meeting, which is the first academically published book defending the Christ Myth Theory. I do not agree with the mythicist position, as I have discussed in a previous article, but I do think that Carrier’s new books is the best defense of the theory published yet. Unfortunately, I actually had to miss Carrier’s defense due to a scheduling conflict, but Simon Joseph has posted a (fairly critical) review of Carrier’s presentation, and Carrier himself has also written a post responding to Kenneth Waters Sr., who critiqued Carrier’s thesis during the conference. Each post provides a good summary of the arguments on either side. 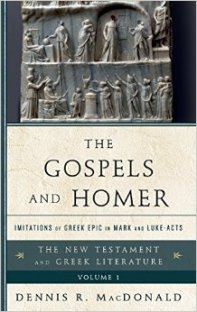 In this post, however, I want to discuss another defense which occurred earlier during the conference, that of NT scholar Dennis MacDonald defending his use of mimesis criticism in identifying parallels between the Homeric epics and the New Testament. MacDonald argues that a substantial amount of the New Testament — in particular, the Gospel of Mark (The Homeric Epics and the Gospel of Mark) and the Acts of the Apostles (Does the New Testament Imitate Homer? Four Cases from the Acts of the Apostles) — was written in imitation of the Homeric epics. MacDonald’s view challenges many of the operating assumptions of form criticism, which is a method of biblical criticism that seeks to identify units of scripture based on literary patterns and to trace them to their period of oral transmission (for a discussion of form criticism, see here). In contrast, mimesis criticism argues that much of the composition of the Gospels and Acts was not based on oral traditions at all, but was instead derived from the literary imitation of earlier texts.

Not surprisingly, MacDonald’s thesis has had a number of critics, but has also received a good deal of praise. I have previously discussed MacDonald’s arguments with NT scholars Christine Thomas and Nathan Bennett (one of MacDonald’s old graduate students at Claremont). Overall, the general consensus is that some of the parallels that MacDonald identifies are very strong and interesting, while others are weaker and more speculative. But, one thing that was generally agreed upon at the SBL conference is that mimesis criticism is working its way into mainstream biblical criticism. In fact, MacDonald’s mimesis criticism is likewise going to be discussed at the SBL Annual Meeting in Georgia later this year. As such, I think that it is worth discussing some of MacDonald’s arguments here as well, especially since some of the analysis will relate to my blog series on ancient biography.

So what is mimesis criticism? Imitatio was a rhetorical and literary tool used in ancient literature to compose narratives based on imitation of earlier texts. It is well known in Biblical Studies that the NT imitates the OT through Midrash. And so, when King Herod slaughters all of the male infants in Bethlehem in Matthew 2:1-18 (a story which absolutely no other ancient source corroborates), it is very obvious to critical scholars that the author of Matthew completely made this episode up in order to imitate Pharaoh’s slaughter of the Hebrew infants in Exodus (1:22; 2:1-8). Such imitation demonstrates that many of the stories in the NT were not based on historical events, but were invented for literary, theological, and allegorical purposes.

That the NT imitates episodes in the OT is not controversial in Biblical Studies, but it is controversial that the NT imitates the Homeric epics. MacDonald first justifies the plausibility of this imitation by pointing out that the Homeric epics were the most widely read pieces of literature in the ancient world. In fact, children who were being taught to write in Greek would often learn to compose by taking metered verses from Homer and rewriting them in standard prose. Since this was a widespread educational practice, it is very likely that the authors of the Gospels and Acts (who were educated in Greek composition) were familiar with Homer.

MacDonald next identifies parallels between the NT and Homer by looking for similar literary tropes, characters, and sequences of events between the two texts. One of the more interesting parallels that MacDonald identifies is the comparison of Eplenor in the Odyssey with Eutychus in Acts. In Odyssey 10.550-60, Elpenor is a character who is sleeping on the roof of the house of Circe, who falls off and dies by breaking his neck. In Acts 20:7-12, Eutychus (whose name means “good luck,” suggesting that he is an allegorical character) falls out of the window of a building’s third floor and apparently dies. However, the story in Acts has a twist, when Paul declares that Eutychus is not dead and awakens him back to life. Through this parallel, MacDonald argues that the author of Acts was able to one-up Homer, by including a similar story but with a happier ending.

MacDonald (The Homeric Gospels and the Gospel of Mark, pg. 13) identifies the following parallels between these two episodes: 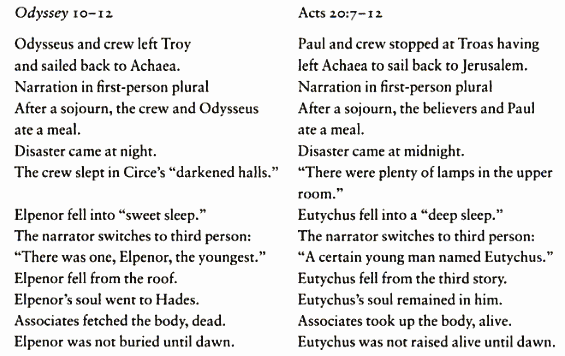 As readers of this blog might imagine, I am very interested in MacDonald’s research because of my graduate research in Classics. I first studied MacDonald a couple years ago when I took a “reception of Homer” class at UC Irvine. I have some reservations about his theory, and I do not agree with all of his parallels, but I definitely think that MacDonald has discovered a very interesting critical method for interpreting the NT. Likewise, I think that imitation of Homer was so common in antiquity (MacDonald likewise discusses the practice being used by Plato, Vergil, Plutarch, and Apuleius) that it is very likely that authors of the NT, to a certain extent, engaged in the practice.

In fact, even Azusa professor Kay Higuera Smith, who is critical of MacDonald’s thesis and responded to him during the conference, acknowledged that there at the very least indirect parallels between the NT and Homer. As she concedes, Homeric episodes and tropes were so prevalent in antiquity that it is very likely the authors of the NT were influenced by some of them. (For the record, she was critical of the theory on the grounds that the author of Mark, for example, had poor grammatical skills in Greek and was thus probably not educated in Homer. However, I disagree with this argument because Homer was standard curricula in ancient Greek composition, as discussed by scholar Raffaella Cribiore in Gymnastics of the Mind: Greek Education in Hellenistic and Roman Egypt, meaning that, if the authors of the NT could write in Greek, they must have had some familiarity with Homer.)

Claremont professor Mark Bilby was more positive towards MacDonald’s thesis, and argues that mimesis criticism will soon need to be a standard feature of NT Studies curricula. The fact that MacDonald’s arguments will be a central part of this year’s annual SBL conference suggests to me that MacDonald’s new methods are, indeed, making headway into mainstream Biblical Studies. I am not sure whether mimesis criticism will necessarily be central to interpreting the majority of passages in the Gospels and Acts, but I do think that it is very applicable to select examples, such as the comparison between Elpenor and Eutychus above.

I will close by discussing a consideration from my own Classical research in ancient biography that I think lends weight to MacDonald’s thesis. Many apologists are fond of Richard Burridge’s comparison between the Gospels and the genre of ancient biography (What Are the Gospels?: A Comparison with Greco-Roman Biography), because they think that it supports the notion the the Gospels are historical in genre. I have discussed in a previous article why, even if the Gospels are ancient biographies, they are not at all similar to historical biographers like Plutarch and Suetonius, who actually cite their sources, discuss their methodology, and do not one-dimensionally praise their biographical subjects.

If anything, the Gospels are more similar to laudatory biographies and ‘open text’ biographies. As Tomas Hägg (The Art of Biography in Antiquity, pg. 381) explains:

“Simultaneously with the emergence of a bookish form of biography in the late classical and Hellenistic periods, vital biographic traditions were in progress at an oral or subliterary level, concerning in the first place legendary figures of great popular appeal … In contrast to the Lives treated in the previous chapter, which are the works of distinctive authors and largely remain under authorial control, these are anonymous; and they are ‘open texts’, with regard to origin as well as transmission.”

I discuss the structural reasons why the Gospels are more similar to these anonymous, less rigorous, and redactional biographies in my article “Are the Gospels Ancient Biographies?.”

However, I have realized from my own research in Classics that, if the Gospels really are ancient biographies, this view actually supports MacDonald’s thesis! I made this connection from the research on my master’s thesis (pp. 40-45) dealing with ring composition in Suetonius. One of the findings of my research was that even the historical biographer Suetonius uses ring structure in his Life of Nero to parallel Nero with tragic characters in Greek mythology — namely, Oedipus (for having sex with his own mother), Orestes (for killing his mother), and Hercules (for killing his wife in a fit of rage). What I realized from this research is that Greco-Roman biographers would often model their subjects based on parallels with characters in Greek epic and tragedy.

So, a surprising conclusion of my research is that Richard Burridge actually supports Dennis MacDonald! MacDonald himself told me that he is critical of Burridge’s genre criticism, and many apologists who tout Burridge will probably not like that his theory about Greco-Roman biography supports that idea that the Gospels imitated Homer. However, the theory that the Gospels are Greco-Roman biographies means that they belong to a genre of Hellenistic literature that very frequently echoed and imitated Greek mythology, including Homer. Considering that the Gospels would also be a less rigorous and laudatory example of this genre, the amount of creative liberties that they took was likely even greater.

And so, scholars have long agreed that a lot of the material in the Gospels and Acts was fabricated in literary imitation of the Old Testament. However, if Burridge is correct that the Gospels are Greco-Roman biographies, then I wouldn’t be surprised if MacDonald is also correct that a lot of the stories in the New Testament were likely fabricated out of imitation of Homer as well.